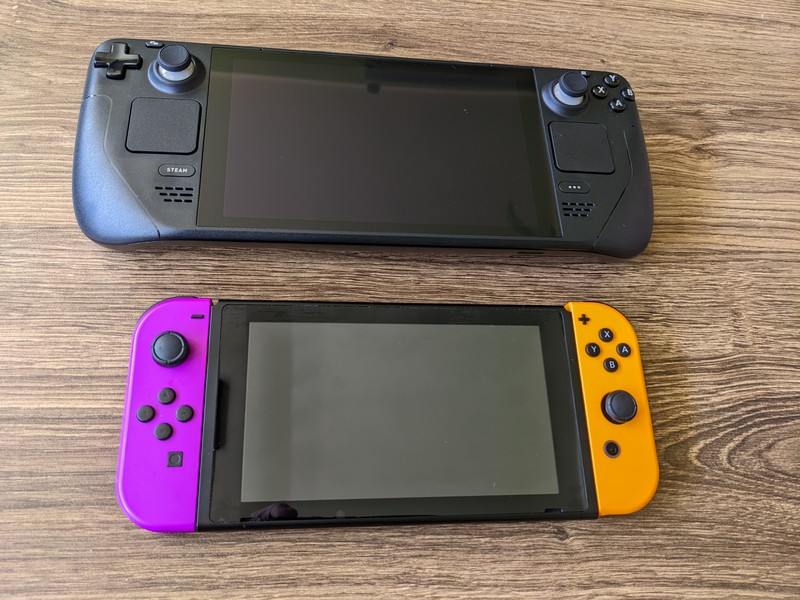 Hello 0ut3r Space visitors! Today short article about my Steam Deck. Last year I preordered highest version (512GB NVMe SSD) and on 27th of June it arrived! Of course with my luck it has screen issue and I had to send it back and wait for exchange. About two weeks later I received new one, fully operational without any issues. I started playing my favorite games and today after a month I can say you something about Steam Deck. Above photo shows Steam Deck in compare to my wife Nintendo Switch. Just to visualize you the size of new console.

As you know I am not the greatest player, but I really enjoy playing games from time to time. In the past I had dedicated gaming PC, PS1, PS2, PSP, Gameboy, Nintendo SNES and Nintendo Switch. I spent a lot of hours in various games and do not regret any.

As I do not have any powerful gaming PC I thought that Steam Deck is something for me, when I have seen it for the first time. Small, portable console, with option to plug in to the TV/Monitor to play my favorite games with graphic experience much better than on the integrated Intel Iris Plus 😀

Lets start with some photos. When I received package it looked like: Very nice and well organized box. After unboxing we have console and the case. Then I turned it on, logged in, updated, downloaded a few games from my library and I realized that over the whole screen there is a blue horizontal line. It was hard to see it at the beginning because whole Steam Store has a dark theme. After waiting so long I was a little disappointed, but oh well, sometimes glitches happen. Steam support was very good, and whole communication was clear and without any unnecessary comments. They just prepared a shipping label (once generated wrong and I had to get back from package point, contact Steam again, get new label and send it finally without issues), and after about 2 weeks I get new one. Fun fact is that support ticket was replied always by different employee, I never spoke with the same person 🙂

Except for the problem with the screen and the shipping label, everything else was already ok.

If you ever had any handheld console in your hands, you could have that strange feeling that Steam Deck is very heavy, clumsy and made of hard rough plastic. I did not feel in my hands some exclusivity or premium product. For example when you grab Nintendo Switch or in the past PSP you could feel the console price in your hand. Or it is just my weird experience lol. (I know Switch is different platform for different audience, but I compare it as handheld console and my experience with other products I used in the past – just explanation for the “real, true, dedicated, greatest gamers” who will burn me at the stake for this comparison).

The fit and overall performance of the product is of a high standard. Nothing creaks, and for its size the console fits well in the hands of both large and small. The layout of the buttons is intuitive and the trackpads simulating a mouse are sensational and certainly more precisely than the analog knobs. The cable to the charger is long, and you can comfortably lie on the couch with the console plugged in. (At least in my case, where I have an outlet with electricity next to the couch). Battery performance significantly depends on the type of game. Demanding games suck the battery in an hour or two and small titles can be played all day. The touch screen in this type of console is a salvation when you need to type something, also when playing clicker games or other simple titles without advanced control.

The operating system is SteamOS. You can install applications as on a normal machine with Linux (maybe worth to install tools from Kali or even Kali Linux distro 😉 lol, now I think I will try to hack neighbors WIFI using Steam Deck). It is also possible to install Windows. As you can see there are light adventures, platform and fighting games all the way to graphically heavy titles. All works great.

No Man Sky is my favorite, at the beginning there were rumors that port of this game is not planed for Switch, I was quite happy to hear that Steam Deck will support this title out of the box. Now we all know that this year NMS will be released for NS. Who knows, if I would know this earlier I would not buy Steam Deck. Now I would love to compare NMS on both consoles. We all know that Nintendo Switch has limited resources in compare to Steam Deck but I hope it will also looks brilliant.

When the console is running at high speed, the fan is clearly audible and heat is gushing out of the hole on top of the console. I’ve heard that there are already manufactured replacements for the fan much quieter and more efficient, but unfortunately at the moment only available in the US. I personally don’t mind the noise, especially when I’m engaged in a game, but it may bother someone. Also Valve warns Steam Deck owners against gaming in hot weather, but it is logical that such a large computing power in such a small box will emit a huge amount of heat.

The console case is very well made with room for the power supply and a carrying handle. When transporting it very useful, it protects consoles well and is comfortable.

In conclusion, if you are a weekend gamer, would like to have access to your collection of games and be able to play them at your leisure, while traveling, on vacation or waiting in line for toilet paper, and when the latest demanding titles don’t need to run on the highest settings and you don’t have dedicated gaming hardware, then this console is also for you. Of course, it is also for fanatics gamers who get up from the computer wanting to continue the game outside their gaming kingdom (room with gaming PC?) or any other person who would like to play some games. So yeah, its for everyone. What’s also cool is that you can install apps and games from outside Steam.

I don’t regret the purchase and can’t wait for the official docking station. Of course first available in US then in some future in Poland.

PS: This article have some photos made by me. Please do some basic OSINT and check what mobile phone was used to made them (I specifically left some metadata), whet else you can find and how dangerous it is for the photo maker? In near future you can find on 0ut3r Space interesting article about OSINT and basic OSINT reconnaissance and how to remove metadata from things you upload to the web. 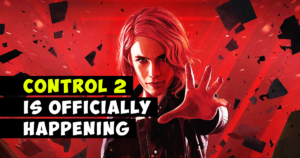 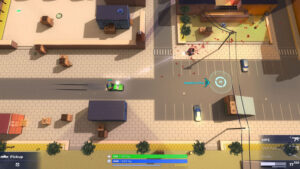 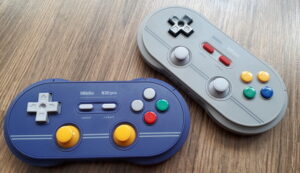